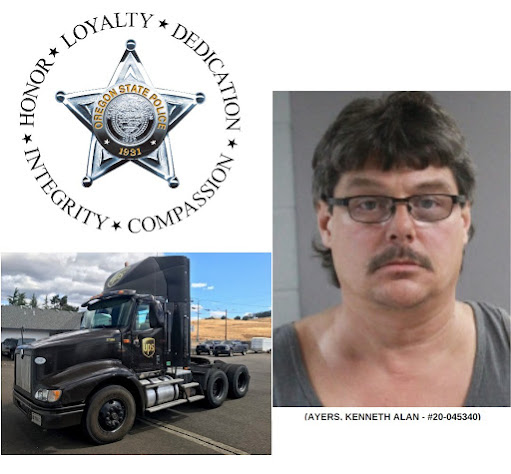 A suspect in the Interstate 5 shootings has been arrested.

Oregon State Police (OSP) troopers have been investigating the shootings that started last spring and spanned thee counties along the I-5 corridor -- evidence gathered after the last incident factored into the arrest.

During a press teleconference, OSP Capt. Tim Fox said Kenneth Ayers, 49, was arrested in Roseburg 11 p.m. Aug. 20. Ayers, a driver for UPS, was then transported to the Jackson County Jail and booked on several charges: Attempted murder, second-degree assault, seven counts of unlawful use of a weapon, seven counts of second-degree criminal mischief and 13 counts of recklessly endangering another person.

The shooting incidents that Ayers is allegedly connected to are:

Fox said OSP troopers have been diligently investigating these shootings since May 12 and recently believed that a UPS truck could be involved. Immediately following the Aug. 19 shooting, troopers were able to locate a UPS tractor trailer combination approximately 1 hour and 60 miles north of the shooting incident. Through the subsequent investigation the truck was seized -- UPS arranged for another truck to pick up the trailers -- and a search warrant was applied for and served. The search of the truck revealed a firearm consistent with the type used in the shootings

The arrest comes after the Aug. 19 incident. On Wednesday, at approximately 9:45 p.m., OSP troopers and emergency personnel responded to Interstate 5 northbound near milepost 37 in Jackson County for a report of a motorist that had been shot. Preliminary investigation revealed that a female motorist was northbound when she was struck with a bullet. She was transported to the hospital, treated for her injuries and released. OSP forensic scientists were on scene and gathered evidence.

The type of weapon Ayers allegedly used has not been released. The victim's identity is still being withheld by the OSP. Fox did say that Ayers was reportedly driving during the shootings.

Previous to May, Ayers' UPS route was north of Roseburg and beginning in May his route took him south of Roseburg. Ayers' route also took him on Hwy 140 and Hwy 62.

"Again, our investigation is still ongoing," Fox said during the teleconference. "(Ayers) is our sole suspect at the moment. If anyone has any further information, please contact us."

UPS has cooperated fully during the investigation.

"They sent a truck to pick up the trailer after the semi was seized," Fox said. "Their level of cooperation has been outstanding."

"I know Jackson County has filed charges," he said. "I'm not sure if the others will."

Ayers does have a number of priors. According to court records, he had a number of traffic violations -- the latest in 2010. In 1988, a then 17-year-old Ayers was charged with second-degree burglary and unauthorized use of a vehicle and reckless driving. He had broken into a repair shop and stole a car. The case was later dismissed and a petition was filed in juvenile court.

The I-5 Shooter has struck again.

According to OSP public information officer Capt. Tim Fox, on Wednesday, Aug. 19, at approximately 9:45 p.m., Oregon State Police troopers and emergency personnel responded to Interstate 5 northbound near milepost 37 in Jackson County for a report of a motorist that had been shot.  Preliminary investigation revealed that a female motorist was northbound when she was struck with a bullet.  She was transported to the hospital, treated and released for injuries.

OSP has reason to believe this shooting is linked to the previous shootings reported along Interstate 5 beginning in late May.

Oregon State Police forensic scientists have responded to assist with the investigation.

OSP is working with the District Attorney’s Offices in Jackson, Josephine and Douglas counties. OSP is still requesting public’s assistance regarding this investigation.  If you have any information regarding last night’s shooting or any of the previous shootings please contact the Oregon State Police Southern Command Center at 1-800-442-2068 or *OSP and refer to case #SP20-235168

No further information is currently available for release as this in an ongoing investigation.

The shootings have been under investigation for the last several weeks. The shooting incidents were first reported after there were reports of someone shooting at several vehicles on Interstate 5 between Roseburg and Grants Pass.  There were five incidents reported.

The OSP soon expanded the scope of their investigation. On Aug. 11, investigators requested the public's assistance in identifying the person(s) responsible for shooting at vehicles on Interstate 5 in Douglas, Josephine and Jackson Counties.

From the time of the first request for assistance on July 14, several additional vehicles have been confirmed to have been struck by bullets. Previously only Douglas and Josephine Counties had confirmed bullet strikes. The geographic location has been expanded to include Jackson County.

If you have information regarding the shootings or if you believe your vehicle has been struck please contact the Oregon State Police Southern Command Center at 1-800-442-2068 or * OSP- Reference OSP Case #SP20-173444.

Highway snipers aren't something new. And, unfortunately, have been increasing over the last few years.