Top is the Facebook post made by Erica Bryan on Jan. 26. Below is the response received on Feb. 9. Bryan hung up after The Rogue Free Press attempted to call her. An Ashland business owner posted the same meme. Below is her response. 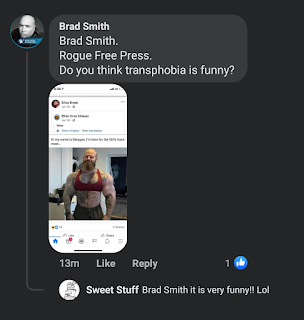 MEDFORD, Ore. -- By late Monday afternoon, a transphobic Facebook post from local business owners was making the rounds on social media -- in a negative manner.

Erica Bryan, owner of Sweet Stuff Bakery, and Steve Barnard, A Street Print and Parcel, posted the same transphobic meme on Jan. 26. Below is Barnard's post. 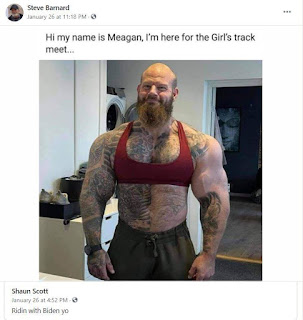 The Rogue Free Press called the bakery and Bryan refused to comment. However, she later posted on social media:

Bryan admits to making the post and that it's "very funny." However, transphobia is very harmful.

From the National Center for Biotechnology Information, there was a 2011 study of depression among male-to-female transgender women with a history of sex work (THSW). During this study, a total of 573 THSW who worked or resided in San Francisco or Oakland, Calif., were recruited through street outreach and referrals and completed individual interviews using a structured questionnaire.

The Human Rights Campaign has been tracking violence against transgender people and 2020 saw more than 44 transgender individuals killed. That information can be found here: https://www.hrc.org/resources/violence-against-the-trans-and-gender-non-conforming-community-in-2020

In short, this sort of behavior is not funny.

One hopes that Bryan and others like her will, eventually, understand that their words and actions can and do cause harm to others.