Old fashioned, homespun, down to earth hate and bigotry -- it's the Rogue River and Trump's American Way!

By Brad Smith
ROGUE RIVER, Ore. --  Steven Essig, who has participated in a number of protests from Cave Junction to Portland, was in Medford the other night when peaceful protesters ran into hostile right wing extremists, including neo-Nazis Keith "Biome Michael" Erickson and Gregg Marchese. This is what "peace-loving patriots" screamed at the protesters:
"Silence is consent”
"No Kosher USA"
“What are you going to do when I fucking rape you?”
“White lives matter”
“Go back home f*g”
"Go back to Africa"
“USA USA USA USA”
“Fucking commies”
“Save the Children”
“You’re gonna get raped”
“What are you gonna do when your children are fucking raped?”
Welcome to the world of those who stand up for social justice and against racism and hatred.
A few weeks ago, Dominique Toyer thought it would be a good idea to have an event at Rogue River, Ore., called "You Are Enough." There would be a march to the community's largest park, Palmerton Park; there would be a barbecue and biracial young people would talk about their experiences -- there would be entertainment too.
However, while a number of the locals have stated on social media they're attending the peaceful, family event, others haven't been so . . . welcoming.
As evident in the following screenshots: 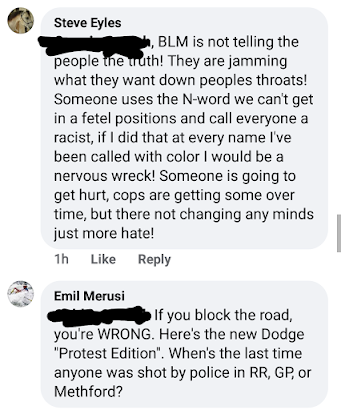 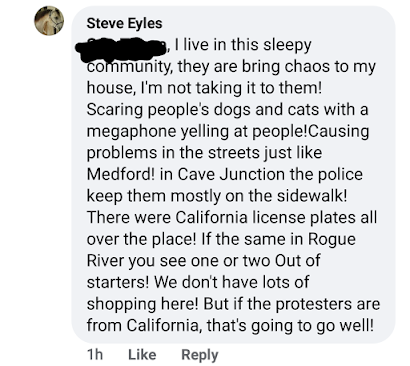 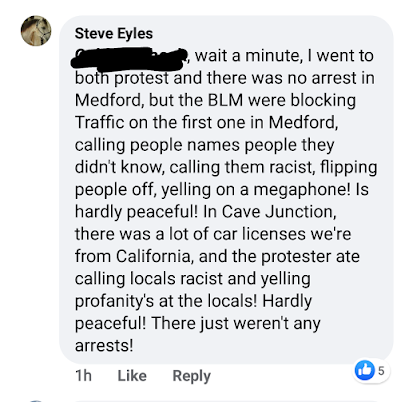 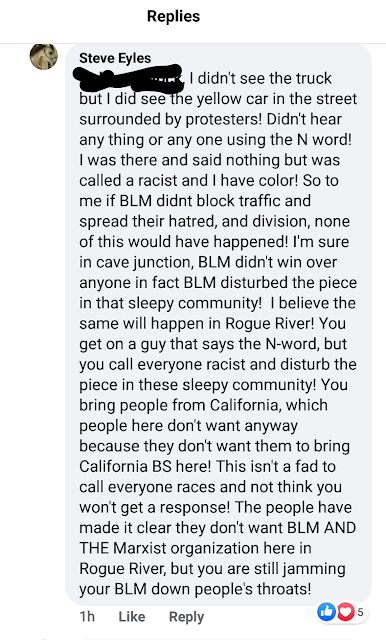 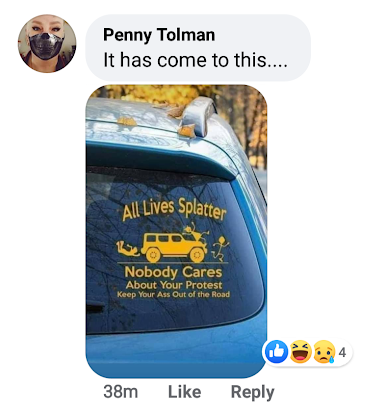 What's very disturbing is Ms. Tolman's photo comment. She identifies herself as a healthcare worker. The Rogue Free Press would like to find her employer and inquire if her views represent their policies. For an alleged healthcare worker to post something like this -- even jokingly -- is troublesome.
Steve Eyles' posts are . . . well, judge for yourself. In past interactions with Eyles, he's launched into incoherent rants about "You Are Enough" as being a prelude to "burning, looting and murder" -- despite the fact that most of the nationwide violence has come from right-wing extremists. Merusi isn't much better. Taylor himself has a lengthy criminal past --  common for some Rogue River residents.
"I'm making potato salad and marinade for the meat. This is a family friendly event, it's not some armed invasion. This is very frustrating," Toyer said during a Facebook video post. "What the hell is wrong with some people? This is something for everyone and it's peaceful. That's all it is."
Medford. Coos Bay. Cave Junction. Medford again. Peaceful protesters have been met with hostility from right-wing extremists, so-called "patriots."
"Patriots who stand side by side, shoulder to shoulder, with violent neo-Nazis and Holocaust deniers such as Keith "Biome Michael" Erickson and Greg Marchese. It would seem that Southern Oregon's "patriots" are fine with neo-Nazis among their ranks.
That's Trump's America. He said the right wing extremists in Charlottesville were very fine people -- even when one of them killed an innocent woman. Trump urged right wing extremists to "take back their states" after a number of governors initiated lockdown protocols when he failed to take action during the Covid-19 pandemic. He also used racist slurs regarding the virus -- something that local business owner Joe McPherson and other residents have done on social media.
And, they think it's funny.
Ms. Toyer, SOEquity and others are to be commended for bringing something like "You Are Enough" to Rogue River. Now, Rogue River has the chance to hear from their BIPOC residents and others -- hopefully, the dialogue and possible understanding Toyer has talked about will happen this Saturday.
Rogue River has the chance to do the right thing. Hopefully, its violent racist citizens won't do anything.
It's a lot to hope for. But, in the end, hope can achieve good things. 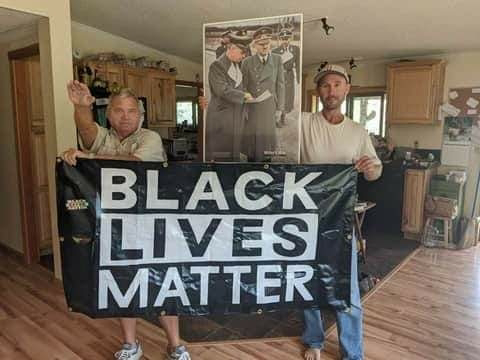 By
Brad Smith
SWEET HOME, Ore. -- Infamous local neo-Nazi Keith Michael Erickson -- also known as "Biome Michael" -- took part in a so-called "Liberty Rally" on July 17.
Erickson told The New Era reporters -- Sweet Home's newspaper -- that he had learned of the rally via Telegram, a social media app that right wing extremists frequently use. He reached out to the event organizer, Jimy White. White and Erickson posed for a picture of them hold a Black Lives Matter banner.
White posted it on his Twitter account.
According to The New Era article, Erickson said "'white America was better' and talked about wanting white people to only associate with other white people. While giving a speech on a bullhorn, Erickson said 'racism is anything the left doesn't agree with.'"
Erickson then reportedly shadowed a local journalist during the rally -- he allegedly asked about their ethnic heritage and if they the reporter were an FBI agent. During the rally, Erickson said those who wore masks were "subhuman."
On his social media accounts, Erickson describes himself as "White (Aryan) Male American National Socialist / Historical Revisionist." He is a Holocaust denier and a 9/11 conspiracy theorist. In December 2018, Erickson and Gregg Marchese, another white supremacist, were barred from entering Havurah Shir Hadash, an Ashland synagogue, where a packed audience turned out to hear a presentation about anti-Semitism in the U.S. and around the world. According to local media reports, Marchese recently posted on Facebook that the KKK was created to protect Southerners from "powerful Jews who had Lincoln killed (and) roaming gangs of recently freed slaves inflicting murder, rape and vandalism on whites."
In January 2019, Erickson and Marchese appeared at a Medford anti-hate crime event featuring Oregon's Attorney General Ellen Rosenblum.

“I don’t feel safe myself,” Erickson. “And, I’m confused why Jewish people don’t like me. I have nothing against them. I just follow the truth and know the real history of the Holocaust. I want to be safe,” he said. “If I want to say that white pride is good, I should feel safe doing that.”

Over the past year, Erickson started attending events held at the Williams Grange in Josephine County. It didn't go well.

The following is from social media posts about Erickson and the Williams Grange:

Neo-Nazi Biome Michael Is At It Again Coming soon . . . .
One of Southern Oregon's most notorious neo-Nazis, Keith Michael Erickson AKA Biome Michael, is at it again.
You can read about it later on today.
-30-
at 00:42 No comments: