Former member describes his time with RV Saltshakers as 'Hellish' 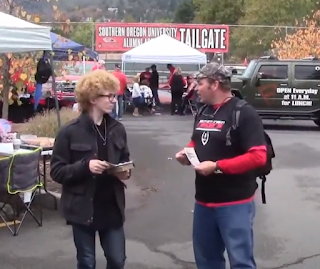 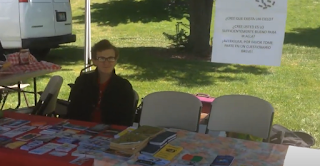 Gabriel Macias was 15 years old when he joined the hate group RV Saltshakers. Years later, Macias regrets his time with the group.

JACKSON CO., Ore – Gabriel Macias has regrets about his time with the Southern Oregon hate group, the RV Saltshakers – and he hopes that others will avoid the mistakes he made.

Macias is a native Oregonian, growing up in Medford and the surrounding area. His father was a “habitual criminal” and Macias was a foster child for a number of years. He’d spent a long time with a foster family who were very conservative Christians. That upbringing left an impact on him and by the time he started living with his grandmother, he was “very religious.”

However, Macias said the absence of a father figure or any strong support system bothered him.

“I guess, in a way, that’s how I fell in with the Saltshakers,” he said.

In 2015, Macias saw the Saltshakers protesting and he decided to check it out.

“It was in the fall. That’s when it happened,” he said. “I was at the Ashland High School and one day, right across the street, I saw these people – they had signs, megaphones, they were chanting. I was curious, very curious. So, I went over to talk to them.”

That’s when Macias first met Jon Clement, the Saltshakers’ leader, and Mason Goodknight of the Community Outreach Evangelism or CORE, based out of Roseburg. Both men took an interest in him.

“They were very friendly, welcoming,” he said. “They asked me a lot questions, they started talking to me about God, Jesus, things like that. They seemed like they wanted to be my friends.”

And, Macias said, that is part of the trap.

“Many in the Saltshakers, especially Clement and senior members, are predatory,” he said. “I mean, they find your weaknesses and target them, that’s how they get your guard down and get you to join. They knew I didn’t have a strong support system, they knew my father wasn’t a part of my life. Clement and Goodknight, along with the others, acted like they were more than friends, like surrogate family members.”

Macias said he wasn’t the only one targeted that way.

“There were other kids they did the same thing too,” he said. “And adults who were targeted because they didn’t have much of family themselves. They were lonely and felt a need to be wanted, liked. Saltshakers filled that void for them.”

Clement, Goodknight and others in the Saltshakers/CORE group were “aggressive,” using megaphones to scream at people and provoking others to argue. Macias watched as women walked up to a Planned Parenthood clinic and “were swarmed by Saltshakers who yelled and screamed at them.” Saltshakers would also follow women down the street, waving signs and picture of aborted fetuses in their face.

“It was all very intense and very intrusive,” he said. “Looking back at it now, it was wrong and sickening. How can you treat people like that?”

Clement has been vocal about Saltshaker tactics over the years. In interviews, he admitted that intimidation was a “valuable tool.”

“It’s how we get our message across and let others know that we’ll never back down,” he said.

To the Saltshakers, what they perceive as “God’s law” overrules actual laws.

“Rules and regulations mean nothing to them,” Macias said. “They’ll push everything to the limit, just enough to get their message across. Now, when I was with them, they never talked about doing anything violent. It was just getting in people’s faces, yelling, screaming, harassing. Things like that.”

What bothered Macias the most was how Saltshakers “weaponized their kids.”

“Parents would bring their kids to these protests and it was very disturbing,” he said. “Kids would be holding these signs and pictures, saying things they didn’t understand – it was wrong. It bordered on child abuse; I feel. And, then they exposed other kids to those awful pictures and they felt it was the right thing to do.

Macias said he went to an SOU Raiders game and passed out religious tracts. When the Saltshakers went to the 2016 Boatnik event in Grants Pass, he was there.

“I was like the dutiful soldier,” he said. “I went along and did my duty and received the praise and attention I felt I needed. Again, that void needed to be filled and the Saltshakers did just that.”

Meantime, Macias was also dealing with another secret: Being a closeted gay teen.

“Looking back at it, that was a big thing,” he said. “I was living this double life and we know how that will eventually tear people apart. I thought I could fill this void by being with the Saltshakers and it didn’t last long. I wasn’t being myself, I was not a nice person. I lashed out at my grandmother and others close to me. I didn’t like who I was.”

A year after being with the Saltshakers, Macias said he knew things had to change.

“It was time to come out, to come clean with myself and everyone else,” he said. “I had to do it before I imploded. So, I posted everything on Facebook. It felt good but there was a backlash from the Saltshakers.”

Some Saltshakers told Macias that he needed to repent or he would “burn in hell.”

“People I thought who were my friends said that I was a horrible sinner and some even called me ‘Judas,’” he said. “See, in their view, Jesus is all about hellfire, damnation and brimstone. A vengeful wrath of judgment and it just went against everything I believed in. There’s no love or mercy. It’s all about hellfire and damnation.”

Macias eventually relocated to Eugene and “basically started over.” He then ended up in southern California and found love. Now, he and his husband have been getting through 2020 like everyone else – and are happy, despite the social upheavals of a pandemic and a volatile election year.

“We visited family in Oregon earlier this year,” he said. “All in all, life’s good. We’re getting ready for the holidays and hoping for a better 2021. I think everyone is.”

Macias heard of people taking a stand against the Saltshakers and their allies. He decided it was time to speak out.

“What they’re doing is horrible and disgusting,” he said. “It did things to me and it’s traumatized me. I’m working it out and I hope other people will hear my story, leave the group and get help. Toxic hate and bigotry are the Saltshakers’ message. It has nothing to do with love. It has nothing to with Jesus or what he taught us. The Saltshakers aren’t Christians. They’re about hate. That’s what people need to know. But I also know that you can walk away, forgive yourself and put that hate behind you. That’s what I did. Others can do it as well.”

Local hate group crawls out of the cyberspace cesspool 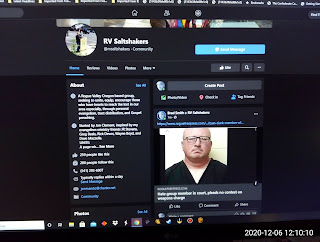 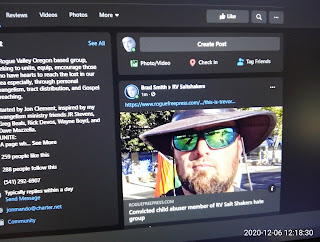 As reported, Clark took a plea deal and will serve ten days in custody, either jail or house arrest. He also got  18 months unsupervised probation and had to surrender his shotgun. Clement is in court on Dec. 14.

Clark and convicted child abuser Trevor Emptage will, no doubt, continue to harass innocent people and spread the Saltshakers' message of hate.

It's a shame that Anonymous or other hacktivists haven't taken action. 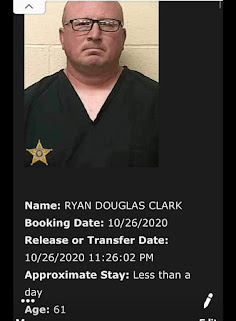 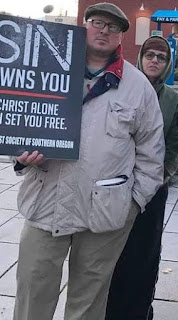 According to records, Clark, 43, appeared in court on Dec. 2. and made his plea on the charges of unlawful use of a weapon. He was sentenced to ten days in custody – which could be served either at home or in jail – and placed on 18 months unsupervised probation. He also had to surrender his shotgun. In a plea agreement, additional charges of reckless endangerment were dismissed.

Clark and Jon Clement, 61, were arrested on Oct. 26 by Grants Pass police after the pair were allegedly shooting at birds from a pontoon boat drifting down the Rogue River. According to press releases, the two men fired shotguns as their boat drifted near both Tussing and Reinhart Volunteer Parks. Some witnesses reported they heard pellets pass overhead.

Clement is scheduled to appear in court on Dec. 14.

Convicted child abuser Trevor Emptage is a member of the hate group as well. It’s still not known if a criminal record is a prerequisite for RV Salt Shaker membership.

As of press time, the RV Salt Shakers page, one of them, is up on social media. For how long is not known.