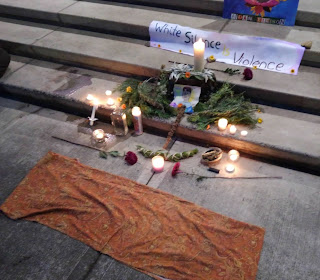 MEDFORD, Ore. – Over 200 people gathered at the Jackson County Courthouse for a Wednesday vigil for Aidan Ellison, a young Black man who was shot in Ashland on Nov. 23.

Southern Oregon Coalition for Racial Equity (SOEquity) the Rogue Action Center and other local racial/social groups helped put the vigil together. Kayla Wade, SOEquity’s founder, was among the speakers.

“We’re here because a white man thought that a young Black kid just expressing himself and listening to music and decompressing was unacceptable and needed to be dealt with,” she said. “We’re here because every person of color, every Black person in this community, has experienced something like that: Having a white person decide that how we’re living our lives is unacceptable and that we need to tone it down or need to be silenced. If we want to live in a world where we can exist with dignity, something has to change.”

As previously reported, on Nov. 23, Keegan allegedly shot and killed Ellison. The victim was reportedly in the Ashland's Stratford Inn parking lot and listening to music. Cops said that Keegan was not happy about the loud music and – armed with a concealed handgun – went outside to confront Ellison. An argument ensued and Ellison was shot. Keegan was taken into custody and charged with second-degree murder, first-degree manslaughter, unlawful possession of a firearm (Keegan didn't have a concealed weapon permit) and recklessly endangering another person.

Court records added a few details to the incident. Keegan was reportedly awakened by loud music this happened at around 4 a.m. He told police that he got dressed, put the gun in his jacket pocket, and went to the front desk. An employee then went out to the parking lot and spoke with Ellison. As they were talked, Keegan went outside and then confronted the young man. That is how the argument started.

Keegan claimed that Ellison hit him in the face a number of times. However, the autopsy indicated that Ellison’s hands lacked bruising or marks consistent with a physical assault. And Keegan’s face wasn’t bruised or marked.

Keegan is still being held at the Jackson County and no bail has been set. His next court date is Feb. 22, 2021.

Ellison’s death sparked outrage throughout the Southern Oregon area and ire at some local media outlets. CBS affiliate KTVL 10 went into detail about Keegan’s alleged plight as someone displaced by September’s Almeda Fire while very little was said about the victim. Meantime, Ellison’s family, living in Klamath Falls, have been targeted by harassment from local white supremacists and even some law enforcement, Clarence Carr claimed.

“It’s been very hard for them and they’re getting by,” he said. “It’s a day by day thing. No one should have to go through this shit.”

A number of people from the BIPOC community spoke during the vigil, sharing their experiences with racism here in the Rogue Valley. As Carr noted, many came here hoping they could avoid it.

“But no matter what, it’s here and we need to do something about it.”

As some local media outlets published articles about the vigil on social media, racism did rear its ugly head from time to time. It got so bad that in one case, KTVL banned “Elijah Rebel Kruis” for promoting hate speech, they said. Kruis’ Facebook page is adorned with Confederate flags and far-right posts. Others, like William Meehan, Jr. and  Ronald King, blamed Ellison for playing “crap rap music” too loud and said the victim was being “disrespectful.” In short, they victim shamed.

It was reported that Keegan didn’t have a criminal record but a restraining order was filed by his ex-wife a number of years ago. She also alleged that both she and her son – whom Keegan had custody of – were victims of his emotional and physical abuse.

In reference to the murder of Aidan Ellison, the Federal Bureau of Investigation is working with the Ashland Police Department to assess whether there are any potential violations of federal laws. While, at this time, this has not been substantiated, under state or federal law, to have been a bias crime, it is important to examine all aspects of this case and determine whether a bias crime has been committed. Anyone with information pertinent to this case is encouraged to contact the Ashland Police Department. The Ashland Police Department is grateful for the FBI’s engagement on this case. An anonymous source, a former law enforcement officer, said they were glad to see the FBI aiding with the investigation.

“According to Oregon law, a hate crime happens when somebody intentionally uses offensive physical contact, threatens physical injury or threatens to cause damage to the property of another person because of their actual or perceived race, color, religion, sexual orientation, gender identity or national origin,” they said. “Did that happen? Not that we know of, so far. We do have at least one witness and maybe some security camera footage – but if there is video footage, how good is the audio? What did the witness hear or see that would indicate this was racially motivated? Those factors have to be taken into consideration. As to how long it will take – it’s hard to say. They have a lot of work ahead of them.”
at 20:39 No comments:

ROGUE RIVER, Ore. -- The location of Saturday's ‘You Are Enough’ event has been changed due to concerns over safety.

Southern Oregon Coalition for Racial Equality (SOEquity) vice-president Dominique Toyer said the Aug. 29 march and event was meant to promote racial justice and equity. The plan was to have participants meet at the Rogue River city hall offices on Broadway Street around 10 a.m. The plan was to have the march move through town and finish at Palmerton Park, she said.

“From the very beginning, it was planned to be peaceful and focusing on how racism affects children and young people of color in rural towns,” Toyer said. “After the march, we planned for a barbeque and an open mic available for anyone wanting to share their experiences. A family-friendly event shedding light on racism in smaller towns. The reality is that small, rural towns often have less diversity than bigger cities and racism is prevalent.”

Earlier this month, Toyer addressed the Rogue River city council about the issue of racism in their community.

Rogue River does have a problem. For example:

Rogue River has a serious problem.

Which became evident as news of “You Are Enough” hit local social media. Residents like Steve Elyes and Emil Merusi railed that there would be “burning and looting.” Merusi joked about hitting people with a pickup and “healthcare worker” Penny Tolman posted an “All Lives Splatter” picture. Brian Campbell threatened in posts about showing up with weapons and wanted others to join him.

“I’m making potato salad and marinade for the meat. This is a family friendly event, it’s not some armed invasion. This is very frustrating,” Toyer said during a Facebook video post. “What the hell is wrong with some people? This is something for everyone and it's peaceful. That's all it is.”

Toyer said the city was very helpful throughout the permitting process. However, when Toyer and others dropped off the paperwork, they learned that others had rented areas of the park needed for the event.

“We decided to give it a try, staying at Palmerton,” she said. “But, the threats were still posting all across Facebook. Everyone in my group was bringing food. These assholes were bringing guns and threatening us. But, lately, that’s been the case.”

Medford. Coos Bay. Cave Junction. Medford again. Peaceful protesters have been met with hostility from right-wing extremists, so-called “patriots.” “Patriots” who stand side by side, shoulder to shoulder, with violent neo-Nazis and Holocaust deniers such as Keith "Biome Michael" Erickson and Greg Marchese. It would seem that Southern Oregon's “patriots” are fine with neo-Nazis among their ranks.

That’s Trump's America. He said the right wing extremists in Charlottesville were very fine people -- even when one of them killed an innocent woman. Trump urged right wing extremists to “take back their states” after a number of governors initiated lockdown protocols when he failed to take action during the Covid-19 pandemic. He also used racist slurs regarding the virus -- something that local business owner Joe McPherson and other residents have done on social media.

And, they think it’s funny.

People in Rogue River are, well, brazenly racist and stupid about this event.

The local newspaper, The Rogue River Press, did an article on the event. An Amy Blair responded with this bizarre rant:

Ok I have a problem with your soequity article you say "she said that all of the people involved in the rally are from southern oregon, and none of will have a connection to either activities associated with Black Lives Matter in Portland or a rally in cave junction " if you visit their webpage they clearly tout themselves as Black Lives Matter.. it's on their homepage and they provide a white reading list... seems to me that this article makes it appear that this group has no ties to the BLM when clearly they do.

I'm just letting you know that your source provided you misleading information. Clearly on their page they are in support for the group. I'll be talking to our local police today to find out what their plans are as cities have been burned in the name if this group. I agree they are welcome to march or whatever because we are a welcoming community. But they shouldn't be providing misleading information regarding their affiliation. Smh.

As SOEquity prepares to move the event to another Rogue River location, Toyer said she’s not surprised nor disappointed.

“All those threats and other nasty comments we’ve received this past week -- it proved my point,” she said. “Rogue River has a serious racism problem and we’re continuing our work, opening dialogues with Southern Oregon communities. Educating. Forging an understanding between everyone. The racists in Rogue River haven’t stopped us. Not one bit.”