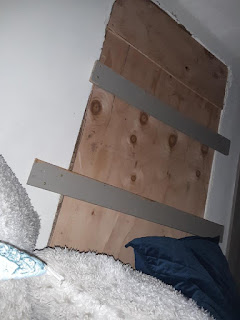 As temperatures fall with storms rolling in, a Medford landlady has cut off a woman’s power as well as tearing a hole in one of her walls. – Picture by Eve Woods

MEDFORD, Ore. – Eve Woods left Washington to get away from one nightmarish situation – and has found herself in another one.

According to Woods, a domestic violence survivor, she came to the Rogue Valley because she “felt safe.”

“I lived in my car for a while,” she said. “I was at the Dunn House shelter for some time. Meanwhile, I was trying to get a job and start my life over. It was very daunting.”

Things started to fall into place. Woods secured a seasonal job at Harry and David. Along the way, Woods said someone introduced her to Melissa “MJ” Jones-Hanscom.

“MJ seemed very warm and friendly,” she said. “She knew my situation and offered me a small studio apartment – they walled up a section of her house and turned it into a small apartment. I had my own entrance, bathroom and small kitchen. It was perfect for me.”

Dunn House, Community Works and others helped with the initial first and last month rent along with security deposits. She moved in on Oct. 2 last year and it was “very exciting” to do so.

“It felt like things were looking up for me,” she said.

Covid-19 hit and businesses like Harry and David shifted the operations to accommodate their workers, letting them work from home. However, Woods still came down with the virus and had to be quarantined. Then she lost her Internet access.

“I tried to get my own Internet but the companies said they wouldn’t do it,” Woods said. “So, I did talk to MJ. She let me use it for a while and then they shut off my access. I told MJ that I needed the Internet for my job – no job, no paycheck, no rent. She said she didn’t care. She said ‘it wasn’t her problem.”

By that point, Woods said her relationship with Jones-Hanscom and her family was already deteriorating.

“There were a lot of issues, a lot of family issues,” she said. “In that house, there’s MJ, her partner DJ and four kids. I’m from a large family myself – but things got out of hand.”

Woods claimed one of the kids would “consistently play with their skateboard,” causing loud noises and shaking the walls so much that pictures and other things fell.

“There were a number of disturbances,” she alleged. “The kids fighting with one another or the parents and I’ve had to call the cops a few times.”

Woods felt the “hostile environment” was getting worse by the day.

“With all of the fighting, yelling, screaming – I wasn’t feeling comfortable here,” she said. “I was reaching out to various groups to help with rent and I’m still dealing with the Covid-19 after effects. My unemployment finally kicked in but I have so many other bills to pay. It’s very hard to juggle everything.”

Woods has paid rent in November and provided screenshots for documentation. She has reached out for financial assistance and is still looking for another place to live.

On Thursday, Jones-Hanscom’s partner and others cut a large hole in the wall between Woods’ studio and the main house. Then, she had the studio’s power shut off and the fuse box padlocked.

Jesse Sharpe with the Community Alliance of Tenants said a generator was left with Woods so she could have power. Another volunteer stopped by and placed some plywood over the hole in the wall.

“We’re doing everything we can but the offices we need to deal with – they’re closed over the holiday weekend,” he said. “We’ve recorded some videos of Eve’s interactions with MJ. We saw her last night and she was hostile,” he alleged.

The Rogue Free Press contacted Jones-Hanscom Friday afternoon. Her response was: “A reporter? Oh, Christ. Can I call you back later?”

She hasn’t responded to texts – especially one asking if the power would be restored as storms are to be hitting the Rogue Valley over the weekend and temperatures are supposed to drop.

No response at all.

Jones-Hanscom has a history of several run-ins with law enforcement.

On Oct. 25. 2016, she was arrested after punching a man at Ashland’s Oberon Restaurant and Bar. As she was being booked into the Jackson County Jail, Jones-Hanscom allegedly spat blood on a corrections deputy. She was charged with a felony charge of aggravated harassment against the deputy along with misdemeanor charges of fourth-degree assault and harassment for allegedly punching the Oberon patron.

Prior to that, court records show Jones-Hanscom’s past convictions include driving under the influence of intoxicants three times, refusing to take a test for intoxicants twice, driving with a suspended license twice, resisting arrest, reckless driving and interfering with a peace, parole or probation officer.

Sharpe said there are no court records of Jones-Hanscom filing eviction papers against Woods.