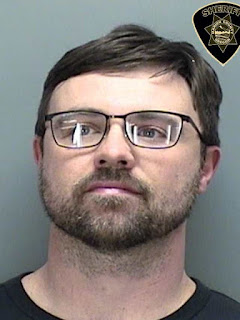 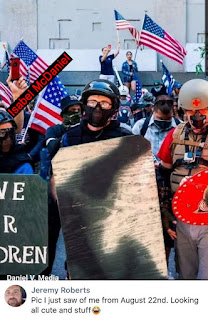 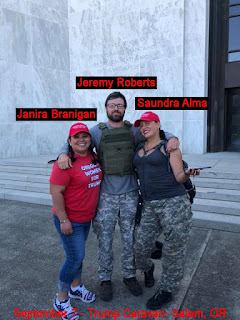 Roberts at a rally held earlier this year.

SALEM, Ore. – A right-wing extremist with a criminal past turned himself in to the Oregon State Police for his alleged role in a violent antigovernment riot at Salem Dec. 21.

According to the OSP, Jeremy Roberts, 40, Albany, Ore., turned himself in to the OSP on Dec. 27. He was booked into the Marion County Jail on the following charges:

The arrest stems from a violent protest staged by right wing extremists on Dec. 21.

According to the OSP,  at approximately 8:30 a.m., a group of people attempted to enter and protest inside the Oregon State Capitol. The Oregon State Capitol was closed due to COVID precautions. The Oregon State Capitol had set up televisions outside of the building for people to monitor the proceedings inside. OSP troopers had checked and secured the doors to the Capitol. A door on the northwest corner of the building was opened by a person exiting the building. Several protesters entered the vestibule area.  There they were contacted by troopers and asked to leave. As troopers attempted to keep them from entering the main area of the Capitol, the altercation became physical (pushing). A protester sprayed some kind of chemical irritant (mace /OC / bear spray) into the vestibule. Troopers used inert pepper balls to keep the crowd back and Salem Police Dept. officers were able to keep the crowd contained in the vestibule.

OSP troopers and Salem police gave everyone in the vestibule several warnings to leave or they would be arrested for trespassing. At approximately 10:30 a.m., a protester again sprayed a chemical irritant at police. Police arrested Ryan Lyles for felon in possession of body armor and unlawful use of mace.  Protesters also deployed a device, which emitted smoke during the engagement.

Two people remained in the vestibule and were arrested: Ronald Vanvlack and Jerry Dyerson and charged with Criminal Trespass and Disorderly Conduct.

At approximately 1:30 p.m., the crowd again attempted to gain entry through a door on the west side of the Capitol.  The window to the door was broken, but the building was not accessed. Police arrested Jeremiah Pruitt for Criminal Mischief and Disorderly Conduct.

Roberts was also identified as a person that attempted to gain access through the west door and an attack on two reporters. He left the Capitol building and was sought after by law enforcement until he surrendered last Sunday.

According to court records, in August 2019, Roberts pleaded guilty to menacing in Marion County and was sentenced to a week in jail and two years of probation. Roberts punched a wall above the head of his girlfriend at the time, a probable cause statement reads.

Records also show that Roberts has a criminal history that includes assaulting law enforcement officers, criminal mischief, being an inmate in possession of a weapon and assaulting another inmate. His records stretch back over a few decades and there are allegations that he took part in a riot at a juvenile detention facility years ago.

The OSP is already bracing for another round of potentially violent protests that might occur over the New Year holiday.