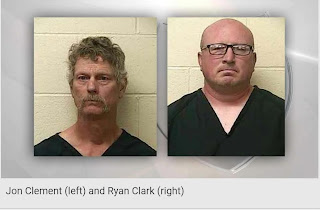 Jon Clement, 61, and Ryan Clark, 43, both of Grants Pass, were arrested on Oct. 26 by Grants Pass police after the pair were allegedly shooting at birds from a pontoon boat drifting down the Rogue River. According to press releases, the two men fired shotguns as their boat drifted near both Tussing and Reinhart Volunteer Parks. Some witnesses reported they heard pellets pass overhead.

The Salt Shakers have been scaling back their weekly harassment of Planned Parenthood clinics since counter protestors – some calling themselves the RV Pepper Shakers – have appeared.

Clement was contacted by the Rogue Free Press. He did not respond.