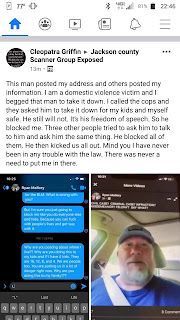 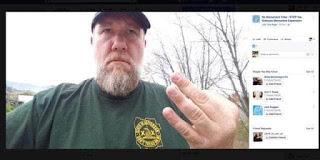 By Brad Smith
JACKSON COUNTY, Ore. -- A domestic violence victim is in fear for her life, and her family's, after being doxxed on social media.

"Thanks to Ryan Mallory, I might have to move someplace else -- so I can protect my family," Cleopatra Griffin said -- she recently changed her Facebook name in order to protect her family. " My address is now online for thousands to see. I spent more than 11 years trying to get a restraining order against my ex. My children live in fear of this man, their own father. I live in fear. I live in the woods for a reason. I have guns for a reason. I hardly have any friends. I rarely go visit family. Most of the time it’s shopping and work is what I go out for. But now my address with my name and my picture is on the scanner group that has thousands of people looking at it. And it’s just handing everything my ex needs on a silver platter. It’s not like I can just up and move tomorrow."

Her nightmare started when Mallory posted an old article about her fiancé.
According to Griffin, her fiancé was arrested over a year ago now. "Yes, he's facing some serious charges," she said. "But, I know that he is innocent. Otherwise after everything I’ve been through I would not be with the man. I still believe in due process. We live in a country that is supposed to be innocent until proven guilty -- not guilty until you prove yourself innocent. I feel like that’s what this man is doing to a lot of people. If you are arrested he posts your picture on the scanner group. To me, that strongly implies that you're guilty before proven innocent."

Over the last few years, Mallory has maintained an active presence on social media. He presides over one of the largest local Facebook scanner groups and another called WARS -- a place that Mallory claims is a group where people can supposedly talk about and debate any subject. However, former members have said when they posted or responded to something Mallory didn't like, Mallory and his supporters along with other admins and moderators, launch a series of attacks. Then, typically, Mallory bans them from the group.

Mallory allegedly has connections to alt-right extremist groups such as III Percenters and other militia groups. According to some former members of WARS, Mallory has allegedly advocated violent actions aimed at Gov. Kate Brown -- then deleted the posts.

"(Mallory) does a fucking good job of hiding his tracks," one former WARS member said, speaking on condition of anonymity. "I left the group because I'd been threatened by Mallory and his goons and the cops won't do anything. He and some of the others in that group talk about scary shit. Going after the government and fucking taking people out. Then -- poof! The post is deleted."

Griffin said Mallory happened to be an acquaintance of her fiancé's.

"My fiancé hired him for some work on his business," she said. "My fiancé was in the so-called patriot movement and so was Mallory during the whole Sugar Pine Mine incident a few years ago. They were on the patriot side. They made sure that the protesters didn’t start looting or burn anything down. Everything was fine between them -- until Mallory found out about my fiancé’s charges from over a year ago and he posted them two days ago, along with his Facebook profile picture."

"Which is untrue," she said. "Then, Mallory posted a picture of me in the photo with my fiancé. Then my fiancé’s ex gets on there and posts a picture of my name, first and last name. Informs everyone that I am with him. So, I change my name on Facebook. At this point I try to speak out and speak up. Not saying anything rude or inappropriate. Then my right to comment on this post got taken away. He read my comment. And automatically took it down. Then someone in the post asks where this man lives. So he post an article that has our address in it. It was a news article about when he had been arrested."

Griffin said she and her fiancé tried to reason with Mallory.


"So, anyway at this point Ryan won’t talk to my fiancé," she said. "He hangs up on him and refuses to answer the phone. So my fiancé leaves a voicemail letting him know the situation and the danger that he’s putting me and my children in. Mind you, my fiancé and I don’t even live together right now. Not until all of his legal matters are sorted out. Until then, I live alone with my kids."

No matter what, Mallory refused to be reasonable, claimed Griffin.
"I message (Mallory) and I try to explain to him what is going on," she said. "He ignores me. My fiancé's mother messaged him. She's with CPS and works with children in danger every day. He blocked her off of everything and refused to speak with her as well. She’s known by judges and lawyers all throughout town because of what she does for a living. Police officers know her as well. After he blocks her, my sister tried contacting Mallory and nothing. This time,  she didn't get blocked but he never responded. My fiancé's brother tried to reach out and say something. His comments got deleted. We got screenshots of those comments before they were deleted. His sister made comments and I believe some of them got deleted but not all of them."

Griffin said despite being blocked from Mallory's group, other members were sending screenshots of other posts attacking her family.

"My fiancé called the police the other night at around 7 p.m.," she said. "I don’t know what else to do and I’m terrified at this point. The officer -- from Medford Police Dept. --  called at 10 p.m. and seemed to understand where we were both coming from. The officer seem to agree that it was a safety concern. He informed us that he had a friend who is an admin for that group. The officer told us that he would call Ryan and inform him of the situation -- see if he would take it down. There should be no reason that my information is up there."

The next morning, Griffin saw that the posts were still up. The MPD officer said he was still working on it and speaking with Mallory. Worried about her family's safety, she contacted the Jackson County Sheriff's Office. She spoke with a deputy and explained the situation -- then waited.

"The deputy called back," Griffin said. "The deputy said that it’s freedom of speech and he could ask him to take it down. But if he doesn’t want to he doesn’t have to. So, at this point, the only thing I can do is wait till Monday and get a hold of my domestic violence advocate. I’m trying to figure out if it’s possible for me to move as soon as possible again. Which really sucks because I thought this place was a good place to hide out at least for a little while."

What angers Griffin the most is what she feels is Mallory's hypocrisy.

"He claims to to care about crime victims, including domestic violence victims," she said. "Mallory has put my family at risk and he doesn't give a damn about us. It's an ego trip for him. If anything happened to my family because of his actions -- I don't think he'd care."
The Rogue Free Press will continue to work on this story and updates will follow.
If anyone has had their own issues with Ryan Mallory and/or his groups, please contact The Rogue Free Press at roguefreepress@gmail.com.
If you are a domestic violence victim or know someone who is, you can find some resources at this link:
https://www.oregon.gov/dhs/abuse/domestic/Pages/index.aspx